A black box warning is the sternest warning by the U.S. Food and Drug Administration (FDA) that a medication can carry and still remain on the market in the United States.

A black box warning appears on the label of a prescription medication to alert you and your healthcare provider about any important safety concerns, such as serious side effects or life-threatening risks.

A black box warning, also known as a “black label warning” or “boxed warning,” is named for the black border surrounding the text of the warning that appears on the package insert, label, and other literature describing the medication (e.g., magazine advertising). It is the most serious medication warning required by the FDA.

When Does the FDA Require a Boxed Warning?

The FDA requires a black box warning for one of the following situations:

The medication can cause serious undesirable effects (such as a fatal, life-threatening or permanently disabling adverse reaction) compared to the potential benefit from the drug. Depending on your health condition, you and your doctor would need to decide if the potential benefit of taking the drug is worth the risk.
A serious adverse reaction can be prevented, reduced in frequency, or reduced in severity by proper use of the drug. For example, a medication may be safe to use in adults, but not in children. Or, the drug may be safe to use in adult women who are not pregnant.
What Information Does the FDA Require in the “Black Box”?

The FDA requires the boxed warning to provide a concise summary of the adverse side effects and risks associated with taking the medication. You and your doctor need to be aware of this information when deciding to start the drug or if you should switch to another medication altogether. Understanding side effects will help you make a better informed decision.

The following are examples of black box warnings that have been required for some commonly used medications: 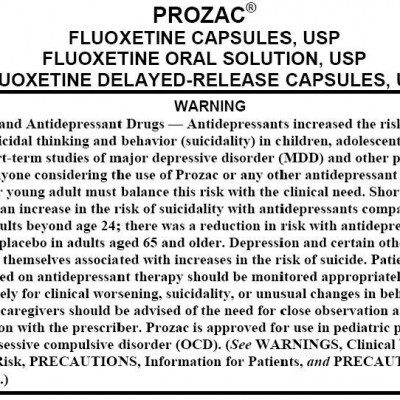 Fluoroquinolone Antibiotics
According to the FDA, people taking a fluoroquinolone antibiotic have an increased risk of tendinitis and tendon rupture, a serious injury that could cause permanent disability. The FDA warning includes Cipro (ciprofloxacin), Levaquin (levofloxacin), Avelox (moxifloxacin) and other medications containing fluoroquinolone. (Warning issued July 2008.)

Diabetes Medications
According to the FDA, people with diabetes taking Avandia (rosiglitazone) have an increased risk of heart failure or heart attack if they already have heart disease or are at high risk of suffering a heart attack. (Warning issued November 2007.)

The following excerpt from the prescription label of Zoloft is an example of a black box warning.

Suicidality in Children and Adolescents

Antidepressants increased the risk of suicidal thinking and behavior (suicidality) in short-term studies in children and adolescents with Major Depressive Disorder (MDD) and other psychiatric disorders. Anyone considering the use of Zoloft or any other antidepressant in a child or adolescent must balance this risk with the clinical need. Patients who are started on therapy should be observed closely for clinical worsening, suicidality, or unusual changes in behavior. Families and caregivers should be advised of the need for close observation and communication with the prescriber. Zoloft is not approved for use in pediatric patients except for patients with obsessive compulsive disorder (OCD).