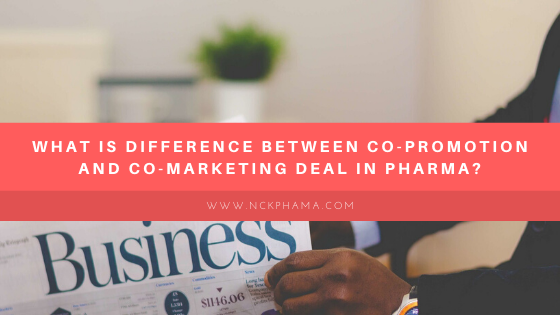 In Co-marketing  a  pharmaceutical  company  can  distribute  its  products. This business model allows two or more organizations  to  market  a  drug  under  at  least  two  distinct trademarks  in  any  particular  country.  The  partner is  granted  control  of  the  distribution,  price  and promotion of the product which is usually obtained either in bulk or finished form from originator at an agreed  supply  price,  a  fact  which  often  results  in some form of licence and supply agreement. There is no direct sharing of revenue or profit. Both companies  are  competing  against  each  other  with  the same drug and revenue is distributed by means of an agreed supply price. Classical examples of such agreements are the marketing of lisinopril by Merck under the name of Prinivil and by Zeneca under the name of Zestril, and the sale of omeprazole by Fujisawa-Astra under the name of Omepral and by Yoshitomi under the name of Omeprazon.

To understand the importance of co-promotion agreements, one only has to take the example of Zantac (ranitidine) for Glaxo (now GlaxoSmith Kline) and Roche in the 1980s. It catapulted Glaxo from nowhere to Number 2 in the U.S. in one decade, rescued Roche from oblivion caused by the patent expiration of diazepam.
Another example of a co-promotion deal was the one signed in 1998 between Searle, the pharmaceutical division of Monsanto and Pfizer for Celebex (celecoxib). Searle realized during the development of its novel non-steroidal anti-inflammatory drug (NSAID) that the company did not possess the necessary U.S. sales force to maximize the sales potential, especially given the fact that Merck was developing a similar product Vioxx. Searle decided to cooperate with Pfizer, who have one of the largest sales forces in the world, and received a total upfront payment of $85 million plus an additional $15 million following expansion of the territory according to the. This deal, however, did not cover territory in Japan where Searle had signed a separate agreement with Yamanouchi.

Co-promotion of products is very common in today‘s marketplace. Sometimes two and even three sales forces will promote the same pharmaceutical product. Each sales force may have different or even the same sales objectives. You will typically be given a list of physicians and your sales ―partners in your territory will also be given a list. Your sales territory will overlap with your partners on some if not all of these physicians. The reason they want several people calling on the same physician is so that they will hear the sales message more often. Research has shown that the more the physician hears the message, the more likely the physician is to remember it and to buy into the message is a good one.