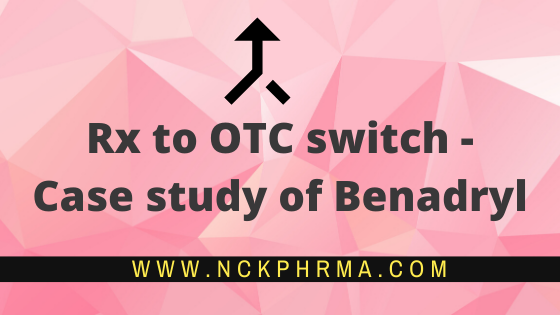 Rx-to-OTC switch refers to the transfer of proven prescription drugs (Rx) to nonprescription, OTC status. Rx-to-OTC switch is a data-driven, scientifically rigorous, and highly regulated process that allows consumers to have OTC access to a growing range of medicines. For a medicine to be granted OTC status, it must have a wide safety margin and be effective, and must bear understandable labeling to ensure proper use. Rx-to-OTC product movement is consistent with a long-term lifecycle strategy strategy that many brands have successfully employed for over two decades and more brands are likely to follow in the near future.

As a general rule, over-the-counter drugs have to be used primarily to treat a condition that does not require the direct supervision of a doctor and must be proven to be reasonably safe and well-tolerated. OTC drugs are usually also required to have little or no abuse potential, although in some areas drugs such as codeine are available OTC (usually in strictly limited formulations or requiring paperwork or identification to be submitted during purchase). One of the oldest OTC drugs is aspirin.

Over time, often 3–5 years, drugs that prove themselves safe and appropriate as prescription medicines may be switched from prescription to OTC. An example of this is diphenhydramine (Benadryl), which once required a prescription but now is available OTC nearly everywhere. Diphenhydramine is an anti-histamine. More recent examples are cimetidine and loratadine in the United States, and ibuprofen (Herron Blue/Nurofen) in Australia.
It is somewhat unusual for an OTC drug to be withdrawn from the market as a result of safety concerns, rather than market forces, though it does happen occasionally, phenylpropanolamine is one such example, after it was removed from sale in the United States over concern regarding strokes in young women.

This website uses cookies to improve your experience while you navigate through the website. Out of these, the cookies that are categorized as necessary are stored on your browser as they are essential for the working of basic functionalities of the website. We also use third-party cookies that help us analyze and understand how you use this website. These cookies will be stored in your browser only with your consent. You also have the option to opt-out of these cookies. But opting out of some of these cookies may affect your browsing experience.
Necessary Always Enabled

Any cookies that may not be particularly necessary for the website to function and is used specifically to collect user personal data via analytics, ads, other embedded contents are termed as non-necessary cookies. It is mandatory to procure user consent prior to running these cookies on your website.