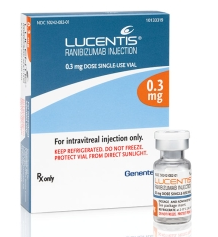 Biosimilar brand : Intas’s Ranibizumab Brand Name: RAZUMAB
As the first company globally, Ahmedabad-based pharma major Intas Pharmaceuticals has launched a biosimilar to Lucentis (ranibizumab) which is used to treat degenerative conditions of the eye called Razumab. It would be 25 per cent cheaper than the imported Lucentis.

A company statement here claimed that it is the first company globally to develop and launch a biosimilar version of ranibizumab, which is manufactured under strict guidelines for sterlie use in the eye. It is offered as single dose vial, thus reducing the risk of contamination during use.

Ranibizumab is a therapeutic antibody fragment designed specifically for treating degenerative conditions of the eye. It blocks the production of vascular endothelial cell growth factor A (VEGF-A), a protein which when overexpressed leads to abnormal blood vessel growth in the retina, that can cause leaks and vision loss.
ADVERTISING

“Intas’ ranibizumab, Razumab is a 100 per cent ‘Made In India’ molecule, a feat achieved by the scientists at Intas. With the mission to provide global healthcare at affordable costs, Razumab will be about 25 per cent cheaper than the imported Lucentis in the hand of the patient. This would lead to an annual saving of about Rs. 35,000 or more in the cost of treatment to the patient, depending on the number of injections used and the clinical condition of the patient. Our objective is to make the treatment available to a wider patient pool, that is as yet denied treatment due to high cost of imported Lucentis, ” said Binish Chudgar, vice chairman of the company.

Razumab is the tenth biosimilar launched by Intas in India, by far the largest number of indigenously developed biosimilars by any company. Since 2004, when Intas launched its first biosimilar, Intas has constantly worked to bring the latest in biological therapies to Indian patients at affordable prices.

Intas also has presence in more than 70 countries worldwide including highly regulated markets. For the financial year ending March 2015, Intas group recorded a turnover of Rs 5100 crore at around 20% CAGR over the last 5 years.