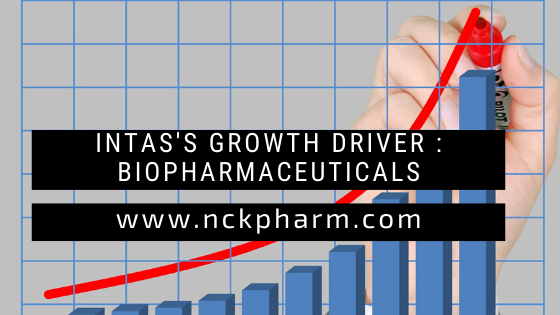 Intas’s success and incessant growth lies in effective execution of its strategic planning in the field of manufacturing, Research & Development, Biotechnology and Global Operations over the last three decades. Today, Intas is more than $650 million organization with CAGR- 30% over the last 5 years and is ranked as the 12th largest pharmaceutical company in the domestic market. [As per IMS Health India, Secondary Stockist Audit (SSA), February 2013]

What is CAGR? How CAGR is calculated? >> Click here to learn

The Biologics Business Unit (BU) of Intas Pharmaceuticals Limited was formerly an independent biotechnology company and was known as Intas Biopharmaceuticals Ltd.

The company has state-of-the-art R&D division, cGMP-compliant multi-product manufacturing facility (for bulk as well as finished products) and multi-disciplinary team of scientists with expertise in transforming bench technology to commercial scale in shortest possible time.

The company has successfully launched five therapeutic recombinant proteins including Neukine® (rHu G-CSF), Erykine & Epofit (rHu EPO), Intalfa (rHu IFN Alfa-2b), Neupeg™ (Pegylated rHu G-CSF), world’s first Peg Filgrastim after the innovator and Terifrac (Parathyroid hormone). In addition to these products, there are more than 15 other recombinant molecules in the pipeline at various stages of development. The products developed at Intas Biotech are registered in more than 28 countries throughout the globe.

Intas-Biotech is focused on continuous development & enhancement of research pipeline to meet the increasing market demand. Leveraging its exceptional scientific talent pool and developmental capabilities, Intas is geared up to increase its presence in key thrust areas such as nephrology, rheumatology, oncology and plasma derived products.​

Three of Intas’ biosimilar assets are already partnered for the EU, US, Canada, China and other markets. The first product for the regulated markets will be GCSF and has received EU registration. Several other biosimilar programs are at advance stage of development, and available for partnering discussions.

Intas signed an agreement with Canadian drug major Apotex Inc, in May 2008, to co-develop and market the low-cost version of a biotech cancer medicine filgrastim (G-CSF) in North America and Europe. Intas developed and manufactured Filgrastim (GCSF) became the first biosimilar manufactured by an Indian company to be registered in EU.

Apotex and Intas in Jan 2009 extended their agreement to develop a biosimilar version of pegfilgrastim. This collaboration gives Apotex the rights to market the product manufactured by Intas Biopharmaceuticals in North America, Europe and selected other countries.

Accord Healthcare, the international arm of Intas Pharmaceuticals Ltd, has received marketing authorization for its filgrastim (Brand name Accofil) valid throughout the European Union. The product is manufactured by Intas in its EMA certified plant in India.