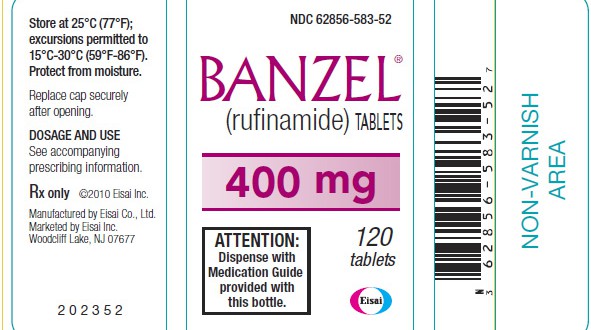 Eisai Co., Ltd. announced today that its U.S. subsidiary Eisai Inc. has received approval of an additional pediatric indication for Eisai’s antiepileptic drug (AED) Banzel (rufinamide) from the U.S. Food and Drug Administration (FDA). Through this approval, Banzel, which had been approved for the adjunctive treatment of seizures associated with Lennox-Gastaut syndrome (LGS) in children four years older and adults, is now additionally approved for the same indication in pediatric patients from one to less than four years of age in the United States.

The additional indication approval is based on an interim analysis of a Phase III clinical trial (Study 303) in pediatric patients from one to less than four years of age comparing Banzel with other existing AEDs as add-on treatments. The study showed that the pharmacokinetic and safety profiles are consistent with those seen in studies conducted so far in patients ages four and above. The most frequently reported adverse reactions in the Banzel treatment group were vomiting and somnolence.

Furthermore, as the FDA has acknowledged that the clinical trial data meets its written request forpediatric studies under the Best Pharmaceuticals for Children Act, Banzel was granted an extension to its marketing exclusivity period, which will potentially continue until May 2023.

LGS is a severe form of epilepsy that affects 1 to 4 percent of all U.S. children with epilepsy. Characterized by multiple seizure types, the disorder is extremely difficult to control, with patients normally having to take several different AEDs. The most common seizure types associated with LGS, tonic and atonic seizures, lead to frequent falls due to sudden loss of consciousness. LGS often causes delayed intellectual development and behavioral disturbances, and therefore has a significant impact on the quality of life of both patients and their families. Banzel is a triazole derivative that is structurally unrelated to currently marketed AEDs. It is believed to exert its effect by regulating the activity of voltage-gated sodium channels in the brain involved in the overexcitement of neurons that potentially causes seizures.

Eisai considers epilepsy a therapeutic area of focus and has been marketing rufinamide in over 20 countries in Europe, the Americas and Asia as well as Japan. By enhancing its drug development capabilities in the field of epilepsy and providing multiple treatment options as part of an extensive epilepsy product portfolio, Eisai seeks to make further contributions to address the diversified needs of, and increase the benefits provided to, epilepsy patients and their families.

One of the most rare and severe forms of epilepsy, LGS usually develops in preschool-aged children, many of whom have some kind of preexisting organic brain disorder, such as encephalopathy. LGS is not only characterized by frequent seizures and multiple seizure types, it is also accompanied by delayed intellectual development and personality disorders. The majority of patients with LGS experience tonic (muscle stiffening), atonic (sudden loss of muscle tone or drop attacks) and absence (brief loss of consciousness or staring) seizures. Tonic-clonic (grand mal), myoclonic (sudden muscle jerks) and other types of seizures may also occur. Tonic and atonic seizures lead to the sudden falls seen in LGS patients that are known as “drop attacks,” a primary cause of injury. Patients with LGS often wear protective helmets with face guards to protect against head injury from these attacks. Although LGS is most commonly treated with antiepileptic drugs (AEDs), patients whose seizures are difficult to manage with pharmacotherapy may have to undergo surgical treatment.

Rufinamide is a triazole derivative that is structurally unrelated to currently marketed AEDs. The agent is believed to exert its antiepileptic effects by regulating activity of voltage-gated sodium channels in the brain involved in the overexcitement of neurons that potentially causes seizures, so as to prolong their inactive state. Eisai entered into a license agreement with Novartis Pharma AG in February 2004, under which Novartis granted Eisai the exclusive worldwide rights to develop, use, manufacture and market rufinamide for any human therapeutic use excluding bipolar mood disorder, anxiety disorders and ophthalmologic disorders. The agent was approved as an adjunctive therapy to other AEDs in the treatment of seizures associated with LGS in the European Union in January 2007 as Inovelon® and in the United States in November 2008 as Banzel®. In Japan, the agent was approved in March 2013 under the brand name Inovelon as an adjunctive therapy to other AEDs in the treatment of tonic and atonic seizures associated with LGS when therapy with other AEDs is considered inadequate, and was launched in May 2013 as Inovelon 100 mg and 200 mg tablets. Rufinamide is currently marketed in more than 20 countries in Europe, the Americas and Asia as well as Japan. The most common adverse reactions reported in studies of rufinamide in patients with epilepsy, including LGS, are headache, dizziness, fatigue, somnolence, and nausea.