Cipher Pharma announced that it has licensed the Canadian rights to Ozenoxacin, a topical treatment for adult and paediatric patients with impetigo, from Ferrer, a privately-held Spanish pharmaceutical company.

In 2013, Ferrer successfully completed a first phase III clinical trial of Ozenoxacin in adult and paediatric patients aged two years and older with impetigo. The study demonstrated the superiority of Ozenoxacin one per cent cream versus a placebo, applied topically twice daily for five days, on both the clinical and bacteriological endpoints by end of therapy visit. In addition, Ozenoxacin demonstrated a superior bacteriological cure compared to placebo by the second visit (day three-four). The trial also demonstrated that Ozenoxacin is safe and very well tolerated in the adult and paediatric populations (for details see Future Microbiol (2014) 9(9), 1013 – 1023).

Ferrer commenced a second phase III trial of Ozenoxacin in June 2014. The multicenter, randomized, double-blinded, clinical study comparing Ozenoxacin one per cent cream versus placebo will be conducted in approximately 412 patients aged two months and older with a clinical diagnosis of non-bullous or bullous impetigo. Ferrer anticipates that the second phase III trial will be completed by the end of Q1 2015.

“We are pleased to partner with Ferrer to bring this novel product to the Canadian market, targeting impetigo due to bacterial skin infections, which remains a common problem in infants and young children,” said Shawn O’Brien, President & Chief Executive Officer of Cipher. “Expanding our Canadian dermatology franchise is a key strategic priority for us, and we believe Ozenoxacin has high potential in the topical impetigo market.”

Under the terms of the agreement, Ferrer will receive an upfront payment and is eligible for development milestones and revenues from product sales in Canada. Ferrer will manufacture Ozenoxacin and deliver finished product to Cipher.

Ozenoxacin is an quinolone antibiotic being developed for the treatment of impetigo and other dermatological bacterial infections. 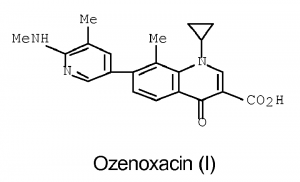 Ozenoxacin is active against some bacteria that have developed resistance to currently used quinolone and fluoroquinolone antibiotics.