In order to respond to the risk of patient family members, particularly children, taking their medicine by mistake, a new measure has been introduced for Letrozole Tablets (postmenopausal breast cancer treatment).

This PTP sheet was designed so that tablets can only be extracted if an inner sheet is slid up or down to match up with the position of the tablet, thus helping to prevent children taking the drug by mistake. 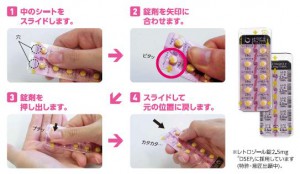 In order to prevent mistaken or inadvertent ingestion, innovations in formulation and labeling are continuing to be developed.

With the aim of helping to ensure there is no mistaken ingestion of tablets, GS1 data barcodes are printed on the back of PTP sheets.

Printing of product name and active ingredient content on both sides of tablets to make them easier to distinguish.

Code (NFP/LTZ) engraved on tablets to make them easier to distinguish. 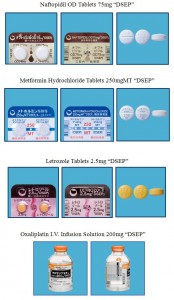 Daiichi Sankyo Espha is a company that manufactures and markets generic drugs, accommodating rising demand based on the spirit of Daiichi Sankyo Group corporate philosophy* of supplying pharmaceuticals to address diverse medical needs. Daiichi Sankyo Espha strives to provide peace of mind for users by fulfilling the most important pharmaceutical criteria of quality, information, and stable supply while delivering the economic benefits of generics.

What is PTP (Press Through Packages) Sheets?

What is GS1 data barcode?

GS1 data barcode is a next generation barcode which has been in use as a global standard since 2010.

It has the merit of enabling management of product attributes such as manufacture lot and efficacy period.