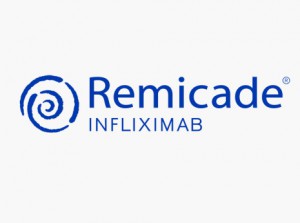 Brand Name: Remicade
Marketed By: Johnson & Johnson
——————————–
Biosimilar of Infliximab is Inflectra.
——————————–
Infliximab (trade names Remicade among others) is a chimeric monoclonal antibody biologic drug that works against tumor necrosis factor alpha (TNF-α) and is used to treat autoimmune diseases. 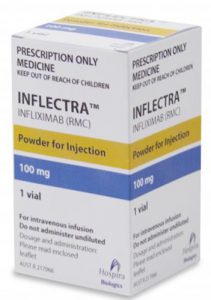 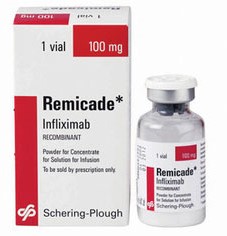 Infliximab was approved by the U.S. Food and Drug Administration (FDA) for the treatment of Crohn’s disease, ulcerative colitis, psoriasis, psoriatic arthritis, ankylosing spondylitis, and rheumatoid arthritis. It is used off-label outside its FDA approval for Behçet’s disease and other conditions. Infliximab is administered by intravenous infusion, typically at six- to eight-week intervals. It cannot be given by mouth because the digestive system would destroy the drug.
Last year it generated $6.6 billion in sales or 9.5 percent of the company’s revenue, an amount that would drop if there is a copy of the drug, known as a biosimilar, on the market.
Pfizer’s Hospira has exclusive U.S. marketing rights to a biosimilar called Inflectra that would be made by Celltrion Inc., a South Korean drugmaker. Celltrion has U.S. regulatory approval to make its copy, though both Celltrion and Hospira have agreed not to begin sales before Oct. 3 at the earliest.
Celltrion’s biosimilar is available in some countries outside the U.S. In a statement, Pfizer said it was “committed to bringing biosimilars to patients in the U.S. as quickly as possible, and are continuing with the preparation of our launch plans for Inflectra for 2016.”
———————————————–
Question here is like pharma molecules do patent expiry to cause drastic decrease in innovator’s biomolecule sale?
Few points to noted –
1. In this particular case of Remicade biosimilar – a lot will depend on how much biosimilar pricing will be less as compared to the Remicade.
If the price difference is more than 30% definitely Remicade price need to be brought down or there is a high chances of Remicade revenue loss to Pfizer drug.
We have seen already when Sandoz promoted Novartis’ biosimilar, Zarxio, they could replace Amgen brand Neupogen in may top hospitals across US.
2. Critical will be how Johnson & Johnson apply the discount on using Remicade after the launch of biosimilar.
3. Celltrion after launching biosimilar of Remicade in Europe, could make a good ground and innovator biopharmaceutical sales are falling down badly. A time will justify whether similar fate can be expected in US market.
———————————————-
Biosimilar versions of Remicade are already available in certain markets outside the U.S.
———————————————-
Will Pfizer should plan for “At-Risk” Launch?
The big question is will Pfizer launch Inflectra before an appeals decision is out. A launch before the appeals decision would be an “at-risk” launch which means Pfizer would be liable to pay damages to J&J if the appeals decision is in J&J’s favor. In other word if J&J wins its planned appeal of the federal court ruling and Remicade’s patent is upheld, Pfizer need to pay J&J big financial damages.