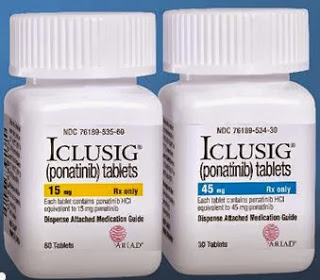 Internally discovered at ARIAD, ponatinib is a BCR-ABL inhibitor that also selectively inhibits certain other tyrosine kinases in preclinical studies, including FLT3, RET, KIT and the members of the FGFR, PDGFR and VEGFR families of kinases.

Discovery to marketing was not smooth for Iclusig. The United States Food and Drug Administration approved the drug as a candidate in 2012, but temporarily suspended sales on 31 October 2013 because of “the risk of life-threatening blood clots and severe narrowing of blood vessels”. This suspension was partially lifted on Dec. 20, 2013 with ponatinib being issued revised prescribing information, a new “Black Box Warning” and a “Risk Evaluation and Mitigation Strategy” in place to better evaluate the risks and benefits of using the drug.

Ponatinib was approved by the US FDA on December 14, 2012, for patients with resistant or intolerant CML and Ph+ ALL, based on results of the PACE phase II trial reported days earlier at the annual ASH meeting. Because the approval was under the FDA’s accelerated approval program the applicant will be required to carry out additional studies.

Ariad Pharmaceuticals and Otsuka Pharmaceutical Co. enter into an agreement for Otsuka to commercialize Ariad’s Iclusig (ponatinib) in Japan and nine other Asian countries on an exclusive basis. Otsuka will also fund future clinical trials in the territory.Under the terms of the contract, Ariad will receive an upfront payment of $77.5M, a milestone payment upon Japanese regulatory approval for patients with resistant and intolerant Philadelphia-positive leukemias and additional milestones for approvals in other indications. It will also receive royalties on commercial sales.

ARIAD Pharmaceuticals, Inc. and Angelini Pharma, through the Austrian subsidiary CSC Pharmaceuticals, announced that ARIAD has granted Angelini exclusive rights to commercialize Iclusig® (ponatinib) for the indications approved by the European Medicine Agency (EMA) in Central and Eastern Europe. These countries include Bulgaria, the Czech Republic, Hungary, Poland, Romania, Slovakia and Slovenia. With this distributorship in place, Iclusig will be available to patients with resistant and intolerant Philadelphia-positive leukemias in more than 23 countries in Europe.

Under the terms of the agreement, ARIAD will remain the Marketing Authorization Holder of Iclusig, and ARIAD will manage this distributorship out of its European headquarters in Lausanne, Switzerland.

Angelini will be responsible for sales and marketing, medical affairs, regulatory and reimbursement support. Angelini will book sales of Iclusig while ARIAD will supply packaged drug to Angelini. An upfront payment to ARIAD and milestones associated with commercial launches will total approximately $7.3 million. Additionally, Angelini will provide ARIAD with a substantial share of Iclusig sales in the region.

“With this agreement, we continue to move towards having Iclusig available to patients in geographies outside of our own commercial footprint,” said Marty J. Duvall, executive vice president and chief commercial officer of ARIAD. “Angelini will be an important partner for us in this region where, according to the EMA, there are approximately 8,000 patients living with chronic myeloid leukemia (CML) who may become resistant or intolerant to other approved tyrosine kinase inhibitors. Angelini has the experience and geographic reach to market and distribute Iclusig in Central and Eastern Europe.”

ARIAD received Marketing Authorization Approval for Iclusig from the European Medicine Agency in July 2013. The commercial launches of Iclusig in these Central and Eastern European countries are expected to begin in 2015.

“By partnering with ARIAD, we will be able to provide this important cancer medicine to patients in Central and Eastern Europe who have difficult-to-treat CML or Ph+ ALL and few options available to them,” said Gianluigi Frozzi, CEO of Angelini Pharma Division. “We look forward to a successful collaboration with ARIAD and to making Iclusig available to refractory CML and Ph+ ALL patients.”